The season will kick off from the 35th Lucas Oil Chili Bowl Nationals at Tulsa (Okla.) Expo Raceway. Twelve episodes are planned, covering a wide variety of motorsports genres and venues.

In recent years, SPEED SPORT has raised the bar with its coverage of major motorsports events such as the Chili Bowl, Florida Speedweeks, Indy, the Knoxville Nationals, the IMCA Super Nationals, the World Finals and more — with editorial coverage that surrounds the event and tells stories no one else is getting.

“LIVE From” is the natural evolution of that approach — combining the very best of the features, interviews and storylines gathered by its award-winning editorial team, delivered in a lively one-hour LIVE stage show hosted by veteran broadcast journalist and SPEED SPORT co-founder Ralph Sheheen. 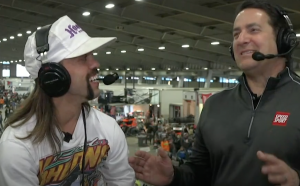 The series premiere “LIVE From the Lucas Oil Chili Bowl” will be broadcast live on Saturday, Jan. 16 from inside the River Spirit Expo Center in Tulsa, Okla., at 6:30 p.m. ET on MAVTV.  (click HERE to find out how to get MAVTV). The full schedule will be announced soon.

“SPEED SPORT’s new “LIVE From” series is America’s pre-race show that race fans have been asking for,” Sheheen said. “We will have the interviews, analysis and pre-race stories that only SPEED SPORT’s deep bench of reporters and experts can bring to the table. I can’t think of a better place to kick it off than the Lucas Oil Chili Bowl!”

“The Chili Bowl Nationals is one of the most anticipated motorsports races every year and I am thrilled that this year we are partnering with SPEED SPORT to provide our viewers with the first Chili Bowl pre-race show broadcasted live on MAVTV,” said John Duff, MAVTV’s head of content. “With this partnership our viewers will have the opportunity to experience the electric atmosphere from inside the River Spirit Expo Center and be the first to know about all of the racing action.”

“LIVE From the Lucas Oil Chili Bowl” is sponsored by Kicker Audio, MyRacePass and Curb Records.

For the latest news, features and updates from the 35th Lucas Oil Chili Bowl, visit SPEEDSPORT.com/live-from-the-chili-bowl.